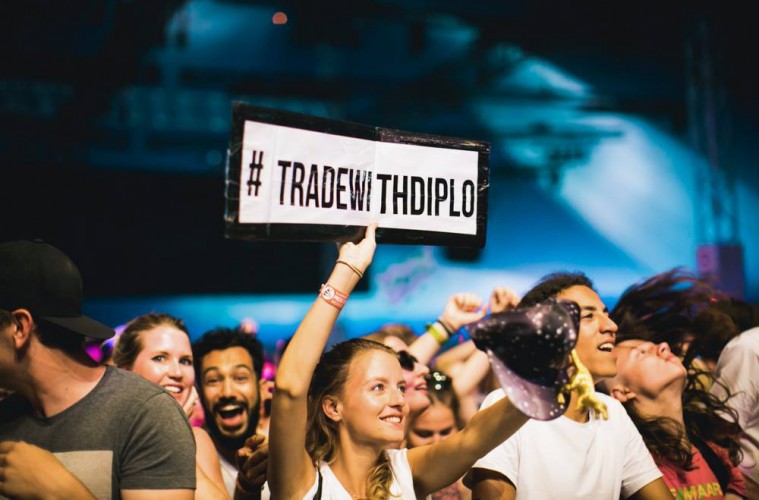 What started out as a weird idea on the couch of our office, laughing, cooking up a masterplan and prepping for execution, ended up with a crazy journey. We met funny, insane, weird, confused but super enthusiastic people willing to help us complete our mission: a trade with Diplo at Lowlands Festival.

When Lowlands – one of the biggest music festivals in Holland – invited us to come, we decided to do something else. Of course you’d like to check out the music, but there’s more to it. There’s people. And people rock. We decided to go on a treasure hunt to trade with one of the biggest deejays of the music scene and wanted the music lovers at the festival to help us out. Starting with a humble Rockstone sticker, we traded on and captured every trade on short Instagram videos to keep you posted. The idea was to eventually get Diplo’s attention on social media and hope that he wanted to trade something that trade by trade became more and more valuable. We came across some crazy objects. With our #TRADEWITHDIPLO-banner we scoured the festival. Watch how we went from Rockstone sticker till Diplo’s egg.

Our first trade at Lowlands (@lowlands_fest ) is a fact! Who is next to trade for this finger light? Come and find us! #rockstone #rockstonesessions #lowlands #tradewithdiplo #nederland #summer #trade #biddinghuizen #sun #festival #live #music #diplo #majorlazer #light #ruil #muziek

@diplo it doesn’t get better than this buddy! 1 hour before your show and we scored this BADASS T-REX cap! Let’s make this trade happen at your show @lowlands_fest find us with the #TRADEWITHDIPLO banner at your show! #trade #wehopethisworks #wouldbeprettyepic #diplo #sun #camping #festival #lowlands #lowands2015 #rockstone #ruil #rockstonesessions @iwantdestruction_creation #cap #dinosaur #gold #stuk #stukgaan

#TRADE11 – Groupie vibes and an egg

How crazy as this may sound: we got Diplo’s (hard boiled egg). While acting as true groupies in front of the stage, we managed to pass on the cap and get that egg in return. It’s a thing he always takes on tour. Never been this happy with an egg. Mission accomplished! Big, BIG shout out to all people who helped make this weird journey so much fun!